It was great to get out and look at plants again. This time with Prof Willby, surveying invaded and uninvaded riparian sites in Scotland. Collecting data for part of Alex Seeney’s PhD project.

Many #fieldworkfails during these few intense days…

Day 1: Completely forgot I wasn’t wearing chest waders “ah look at this flowe..shi*” as I squat in the middle of the river just wearing knee-high waders. That was site 1 of 6 for the day. Got chomped by loads of horseflies, but not Nigel. They must know he is the boss or something. Got a little drone action though with this amazing shot of an invasion front taken by Nigel on the River Pow.

Day 2: Skipped this day due to microbiology crash course with opportunistic samples!

Day 3: 25 minutes later, after trudging through wheat fields, brambles, nettles and barbed wire I no longer had the dark green notebook… luckily it wasn’t hidden in the dark green vegetation but rather at a particularity short patch of golden wheat. PANIC OVER! (yes …it had data in it).

Day 4: Long drive down to Dumfries from Stirling. Made some Death Wish Coffee which didn’t have the near death caffeine experience I was needing (will add double next time). I got to land the drone…yep was thinking about how much it cost the entire time. So many midgey bites!! Also managed to nearly fall over, fall over and electrocute myself, all in one day. But I didn’t crash the car. Totally proud of myself. 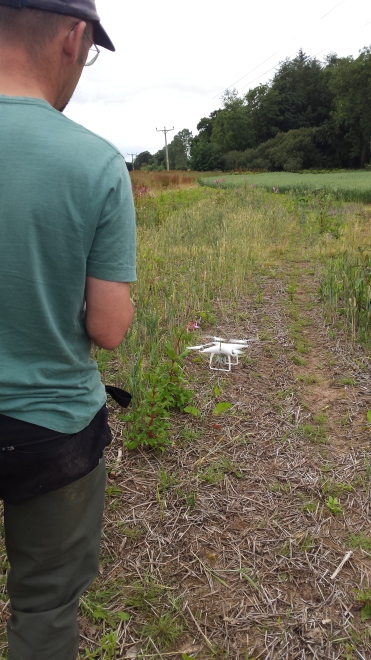 Some amazing growth strategies by Impatiens glandulifera (Himalayan balsam) on the River Dunning. I. glandulifera was stocky with thick stems and flowering on shorter stems when growing on gravel bars. This growth form was also seen on the River Pow in plants growing away from the water’s edge, along the outskirts of crop margins.

Fallopia japonica formed dark, dense forests along the Argaty Burn. There was little growing under these stands and no other species present when coverage reached 100%. This was in contrast to what seemed to be younger F. japonica stands where there was still a range of native species residing beneath the low, broken F. japonica canopies. 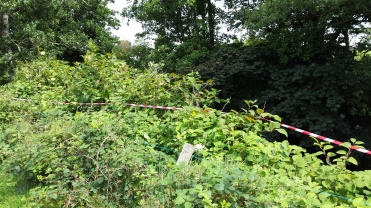